After almost two months we had arrived back into Estonia. Hitch-hiking to Tartu was fairly easy and it was great to see our little town again. 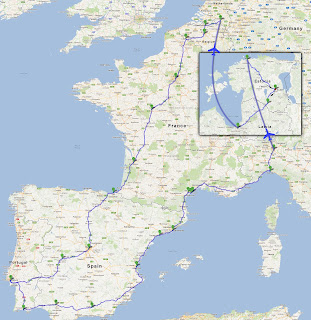 
Hitch-hiking home
Posted by Kennyxest at 11:34 PM No comments:

Our road to Milano didn't go as planned, but it most certainly was interesting. We decided to take a cheap train out of Genoa, to get a better position for hitch-hiking to Milano. It took us to a small town on the national highway heading from Genoa to Milano. What we didn't realise before heading out, was that the road was actually in a valley. So it was really narrow and didn't have much of room for cars to stop. After standing besides the road for some hours, we took a very short ride to the next town, which was a bit bigger than the one we started off from, but even from there, hitch-hiking was a difficult task. Mountain roads aren't made for hitch-hikers ;)

So as we seemed to be bit stuck in those little villages, we walked to the railwaystation nearby, to see if there are any trains heading to Milano. When we got to the station, we found that the ticked office was closed and the self service terminal was out of order. There was a train coming from Genoa in 30 minutes and going to Milano. Simple decision was to hop on the train and go as far as we could. It took us all the way to Milano and we had no issues with the ticket inspector, as she didn't ask anything from us. In the end getting to Milano proved to be easier than expected =P

When we arrived in Milano it was raining fairly heavily and it didn't stop for pretty much rest of the day.

Lunch in the rain

Posted by Kennyxest at 10:48 PM No comments:

Getting to Italy and Genoa

After parting from our french friends near Montpellier we decided to try to get to Niece by the end of the day. Started off with a short trip to toll booths close to Nimes. From there, we got another ride to toll close to Arles, where we actually were rained out for an hour or so. There was a wall of rain approaching the spot where we were dropped off, and it most certainly delivered all it got once it reached us. But as soon as we got back on the side of the road, we were picked up by a nice guy who was driving back to his home town close to Saint-Tropez. He dropped us off at a gas station next to the speedway to Niece.

In that gas station we met another traveler, who was waiting on a truck driver who had promised to take him to Austria. He was very friendly and helpfull. In the end, he helped us to get a ride with two americans, Chris and his mother Claudia. They were actually trying to reach Venice on that same night, mind you it was 8pm at that point. After talking with them a bit, they were nice enough to take us along for the ride and take us as far as they went. Chris tried to push his driving abilities as far as he could and in the end, he had to stop in Genoa. There was a small problem in a gas station and trying to fill up the car, but we probably would have stopped there with or without that stoppage.

Genoa will leave a permanent mark to memory from this trip. We walked to the train station and decided to spend our night next to it. Erki made a mistake of leaving the wallet and smartphone in the pockets before snoozing off, and the result was that a passing by pickpoketer snatched it and ran with them. Bonehead move, but we were fortunate as nearby people saw that happening and were able to retrieve the wallet and the phone to us. We did loose some cash, but got back all the cards from the wallet and the phone as well.

In the morning we took a train out in direction of Milan, to start hitch-hiking there.

Posted by Kennyxest at 10:26 PM No comments: